The curse of white oil? 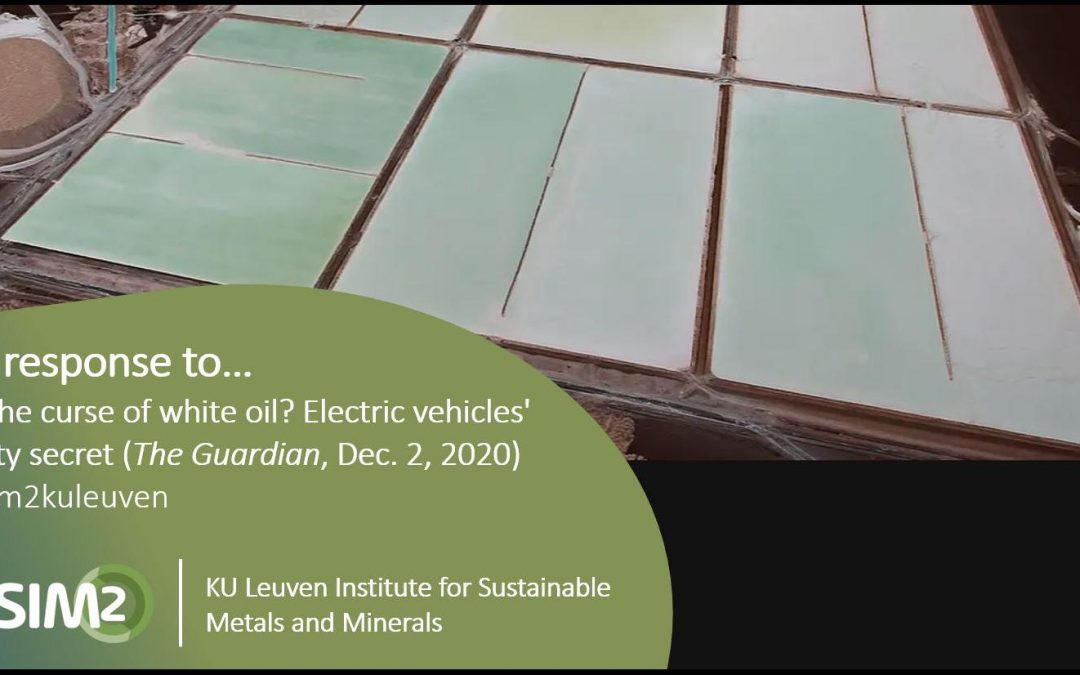 “The curse of ‘white oil’: electric vehicles’ dirty secret” is the attention-grabbing headline of the in-depth article by Oliver Balch, published in The Guardian (December 8, 2020). In a very eloquent way, this “long read” article reveals the social and environmental tensions associated with the transition to a climate-neutral economy. Peter Tom Jones (SIM²) reacts in this piece, which was also published as a LinkedIn article.

The analysis in The Guardian article covers the wide spectrum of lithium production methods, from (1) hard rock mining (with a key focus on the Social License to Operate issues in the Trás-os-Montes region in Portugal, a region I have fond memories of back in the period 1999-2000), to (2) lithium production from brines in the Atacama desert and the (3) urban mining of End-of-Life batteries as already performed by leading companies such as Umicore in Belgium.

Recycling is not enough

Given the massive need for lithium to support the transition to widespread e-mobility and stationary renewable energy storage, we know that recycling alone will not be sufficient, even if we allow for a drastic modal shift to public transport, cycling and car sharing systems. Primary mining of lithium will therefore be required.

Similarly as with the mining of rare earths, it would be a dereliction of duty to shift the burdens of the mining process to the global South and adopt the hypocritical “turning a blind eye” approach. In that sense I fully agree with Prof. Eric Pirrard (ULiège) who recently stated in an EOS interview about primary mining in Europe:

"If we want that mining is performed in a socially and environmentally responsible way, then it is better to do it here [in Europe].”

Towards an EU lithium value chain

For Europe, therefore, the fundamental question is: how can we set up a comprehensive lithium value chain – from geological exploration, to mining, refining, battery production and End-of-Life recycling – in an eco-friendly and socially-responsible way?

Such an EU value chain will need to take advantage of the lithium hard rock potential that is available in the multi-mineral-lithium pegmatite deposits in Portugal, Spain, Finland, France, Germany…

Given the resistance to mining in Europe, a massive challenge lies ahead, as also acknowledged by the influential Slovak EC vice-president Sefcovic. This challenge is captured in the closing quote of the Guardian article:

“Portugal’s protesters can see that blocking green growth won’t get them far. These interior regions need investment. Hence the banner hanging from the playground fence in João Cassote’s neighbouring village, which reads “Sim à Vida” (Yes to life) beside “Não à Mina” (No to the Mine). “Life” for opponents of the mine, including Mario Inacio and Maria Carmo, is eco-tourism, regenerative farming, local supply chains, and other tenets of low-carbon living. For Cassote, it means a decent wage for a decent day’s work. For a green future, it’s going to be vital to accommodate both visions.”

With our KU Leuven Institute for Sustainable Metals and Minerals (SIM²) we will not shy away from the formidable challenge associated with the provision of critical metals – which by default will include primary mining given the fact that even 100% recycling will not suffice – for the transition to a climate-neutral economy.

(*For 20 years The Guardian has been my favourite newspaper for its high-quality investigative journalism in these fake news times.)

(**This article was first published as a LinkedIn article.)